Inonotus obliquus (commonly known as Chaga mushroom) from the Norwegian forests North of the Arctic Circle. The mushrooms are mostly found on old birch trees. The Chaga mushroom grows primarily where a branch of a tree is broken or where the stem bark is usually damaged. The Chaga mushroom which grows on birch is the most effective one to use as medicine.
When collecting the mushroom for medical use, it is important that you get both the black, coarse layer which is the outer layer, as well as the soft, corky part which is the inner parts of the mushroom.Chaga contains a number of important medical compounds and nutrients: Polysaccharides (both water-soluble, alcohol-soluble and protein-bound), beta-glucans (which are also a form of polysaccharides), the enzyme superoxide dismutase (SOD), important minerals (calcium, potassium, magnesium, iron , phosphorus, zinc, silicon), trace minerals (copper, manganese, germanium, caesium, rubidium, antimony, barium, bismuth, boron, strontium), vitamins (B2, B3, D2), dietary fibre and an almost complete amino acid profile with the exception of isoleucine . The content of the various minerals varies greatly in relation to geographical sources. Chaga contains a lot of germanium and zinc compared to the content of other foods. Betulin (and betulinic acid) are medical active substances from the birch tree that are concentrated in the black outer layer of the Chaga. This is found to contain about 30% betulin.The Chaga mushroom has a coffee-like taste. It is an adaptogen that acts as an immunomodulatory, cancer inhibitor, tumour inhibitor, gene-protecting, general strengthening, blood-purifying, blood glucose-lowering, analgesic, invigorating stomach, liver strengthening, anti-inflammatory, anti-bacterial and virus inhibitory. The mushroom contains the most powerful natural antioxidant that is known.

Right back to the 16th century there are records showing that the Chaga mushroom has been used in folk medicine as tea and supplement, and in Eastern European countries it has traditionally been used as a medicine for cancer, indigestion, wounds and tuberculosis. In the past, some people in Russia daily drank a brew made of the mushroom, just as we drink coffee or tea today. It has been observed that among these groups of people, there were very few cases of cancer. Reports on use of the mushroom are also found in Canada, North America, Finland, the Baltic States and other countries of Eastern Europe. The Nez Perce Indians in North America used the mushroom in Pemmikan, and they were immune to diseases brought by the early settlers.
As a remedy for various cancers, Chaga has been used for inoperable breast cancer, stomach cancer, ectopic cancer, lung cancer, skin cancer, rectal cancer and Hodgkin's disease.

Chaga as an antioxidant:

Much of the health potential of Chaga can be explained by the fact that the mushroom is one of the most powerful and concentrated antioxidants ever found. Antioxidants improve health and slow down the aging process by protecting the cells from damage caused by unstable molecules, known as free radicals. Chaga is considered the "the master of heavyweight" when it comes to antioxidants.


The Chaga mushroom is not toxic and no side effects have been reported with the use of Chaga.
If you have a health problem and use school medicine prescribes from a doctor, you should be aware that interactions may occur. Talk to a doctor / therapist.

May be used for: 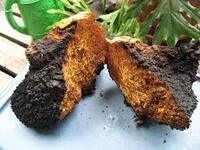 The power of natural ingredients